Negotiation is all about Leverage

I am a sports fan so I watch a lot of ESPN Sportscenter.  So, one of the stories that I can’t escape is the NBA lockout drama that has been playing out for the last 180 days or so.  The NBA has now lost a quarter of it’s season and they don’t really seem to care about saving the rest of it.  This week, the players decided to file anti-trust lawsuits in hopes of advancing their cause.  As interesting as it is to watch adult millionaires bicker over money, I personally could care less if they ever end the lockout.  Despite that, the lockout has been an interesting case study of how negotiations work and there are some lessons that can be learned.

Negotiation skill seems to be a coveted ability within business.  It’s something that is thrown into nearly every mid-level management or leadership development curriculum.  This stands to reason, I suppose.  When you really think about it, we are negotiating pretty regularly as part of our jobs.  We start our employment with any company by negotiating our salary and benefits.  Then, we negotiate for working arrangements.  Our teams are perpetually negotiating for resources, support or access to information.  Negotiation happens all constantly. 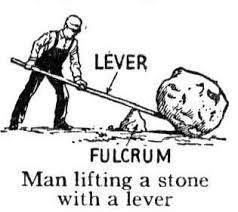 I was never sent to a formal class on corporate negotiations, so most of my knowledge in this area came from what my Dad taught me growing up and then from my early sales career.  Beyond that, it’s just been experience.  And what my experience tells me is that to win at negotiations, the main thing you have to understand is leverage.  The word leverage comes from the root word “lever.”  If you recall your high school science lectures, a lever is a rigid bar that concentrates power so that you can move an object you wouldn’t be able to move otherwise with a direct application of force.
So, when we consider leverage in terms of negotiation, it’s about how to concentrate power in order to get the other party to move (to influence their decision).  For there to be any real negotiation, both parties need to be in a position where they have both something to give and something to gain.  In a salary negotiation, the company can give you more money and benefits, but they also stand to gain your abilities and talents.  On your end, you can give more time, energy, focus to the job and you stand to gain more in salary and benefits.  The negotiation is sorting out how much each party gives and gets.
The NBA lockout negotiation is an interesting example of an imbalance in leverage.  Based on the analysis I’ve formed from the perspective of my couch, it appears that the owners of the league have most of the leverage.  The players have money to lose or gain, but they really don’t have much to give beyond what they are already contracted to do.  They play basketball and get paid or they don’t.  That’s why the lockout began–no basketball means no money for either side.  That should be leverage to get a deal done (at least one would hope so), but not necessarily leverage for either side.  The lawsuit filed by the players this week is a clear attempt to gain leverage.  They didn’t have the power at the negotiation table to get a deal done, so now they are hoping the legal system will help them gain a position of power over the owners.  This remains to be seen.  Both parties in this negotiation seem to be waiting for the other to blink, and neither group seems all that interested in getting back to basketball.
This situation reminded me of the errors I see so many people make when it comes to negotiation in both business contexts and in life.  We don’t pay close enough attention to leverage until it’s too late.  For example, if you always feel like you pay too much when you buy a new car, it’s because you are letting the car sales person have the leverage over you.  Here’s what leverage looks like in a car purchase:
These are just a few examples of what leverage looks like in the car purchasing process.  These same items are points of leverage in nearly any negotiation (including those with your spouse or children).  There are dozens of more ways that leverage exists or can be created.  The key question when it comes to leverage is to determine what levers are in play (like those above) and how important those levers are.  The trick is then to use the levers to influence the other party to give you what you want.  Most of the time, this can be a win-win situation in which both parties walk away happy.
I’m not a classically trained negotiator, but I’ve made some really great deals throughout my professional career by simply understanding what leverage existed and then using that leverage to get what I wanted.  By studying leverage, you will be well on your way to becoming a powerful negotiator.

All stories by: Jason
Working with Jerks? It might just be You.
The Truth will Set you Free