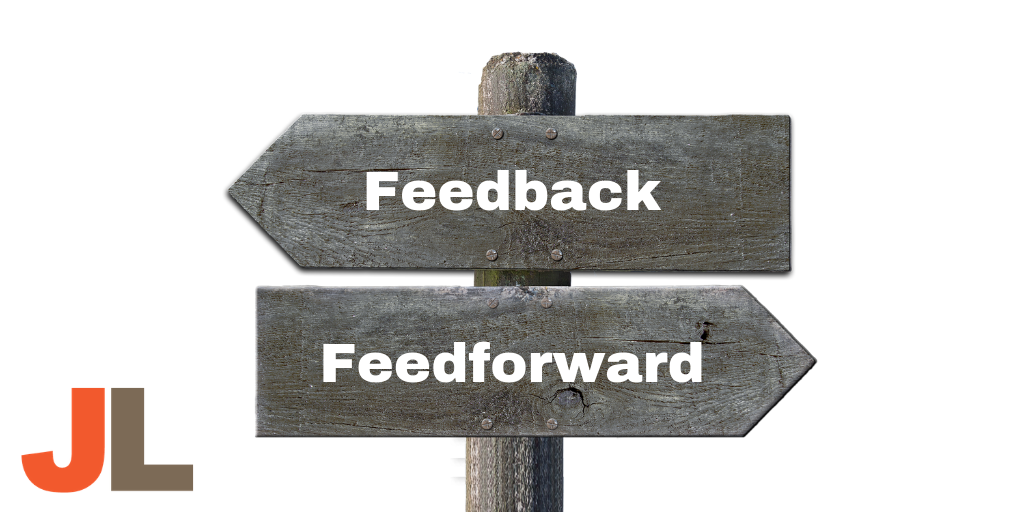 Moving From Feedback To Feedforward

I can still remember when I first heard about “feedforward.” It was in a presentation by Marshall Goldsmith at one of the first HCI Summits many years ago.

The concept sounded weird and a little gimmicky. But, it stuck with me.

At its essence, the idea was that while feedback was oriented towards criticism of past performance, feedforward instead provided suggestions for future improvement. People dislike criticism while they tend to more openly embrace suggestions that can be incorporated in the future. Simple enough.

While it seemed like a nice concept, I didn’t really do much with it after this first exposure. I still gave feedback the same way I always had.

Fast forward seven or eight years where I find myself at another conference listening to Marcus Buckingham. He again introduced the idea of feedforward. His approach was slightly different, but the idea was the same.  Suggestions instead of criticism.

The idea again appealed to me and this time I started experimenting with it with my team. And it seemed to work. While I was happy about the positive outcomes, I didn’t really understand why this was supposed to work so much better. I had been told my entire professional career that feedback was vital.

Yes, giving feedback was going to suck and often hurt. But, it IS “the breakfast of champions.” So they said.

To get ahead, you needed to learn to embrace the pain of feedback and try to figure out how to absorb it and learn from it.

I was skeptical that this “softer” feedforward approach might just be a way of softening the experience to feel better while losing the bigger impact. This was in spite of personally seeing the positive short-term results when I used it.

But then I found the neuroscience research that helped me understand why we have such a hard time with feedback.  Here’s a quick excerpt from my book describing one of the most interesting findings:

Recent neuroscience research suggests that our brain reacts to “social” threats similarly to physical threats. Perception of negative social comparison or being treated unfairly have been shown to trigger a brain response similar to physical pain. (Lieberman, Matthew D., Eisenberger, Naomi I. et. all, 2009) This would help explain why we tend to react defensively to critical feedback–particularly when we think it may be unjust or threatening to our social status at work. It’s a natural, biological response to avoid pain.

Our brain appears not to differentiate between social and physical pain. In other words, feedback can feel both psychologically and physically painful. No wonder we want to avoid it.

And to make matters worse, there’s research showing how we tend to overestimate our strengths while overlooking our weaknesses. Thus amplifying how socially threatening any critical feedback can seem. More threat, more pain.

This is why feedback is such an awful experience most of the time.

Work is frequently designed like a big social game of comparison to our peers. It’s a zero sum game if you want to advance. You need to be perceived as better than the people around you. Feedback will rarely feel non-threatening when you are playing such a high-stakes game.

Once I understood these factors, the true magic and power of feedforward finally revealed itself.

Criticism of past performance (which cannot be changed) creates a social threat response. This leads to an immediate defensive reaction as your brain and body try to find their way back to safety. When we are defensive, we can’t hear and process information constructively.

The approach of providing suggestions for improving future performance prescribed by feedforward disarms the social threat response. The exchange is oriented towards providing ideas for how the individual can improve or make a greater impact in the future. Not only does this reduce defensiveness, but it also creates autonomy for the receiver. They are in control and can decide what to do next.

Here are the steps I would recommend if you’d like to start experimenting with it yourself:

There’s been a lot of focus recently on teaching managers to be coaches. If you have ever had the opportunity to observe a good sports coach working during practice or games, you have probably noticed that most of what they do is provide instruction and suggestions for how to perform better on the next play. They know that spending too much time criticizing past performance will just demoralize the athlete and doesn’t help them improve. Coaching is fundamentally about switching from feedback to feedforward.

Bottomline: Stop criticizing people for past performance that they can’t change and start focusing on giving them the insights they need to be better on the next play.

All stories by: Jason
Want To Improve Performance Or Engagement At Work? Check Your Assumptions.
Why Work Still Sucks (and Organizational Change Is SLOW)